Catch Of the Day

Catch of the Day

Fish species most frequently caught in Barbados and neighboring islands are: 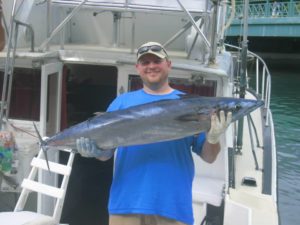 Happy Client of Legacy Fishing Charters with Catch of the Day.

The mahi-mahi or common dolphin fish (Coryphaena hippurus) is a surface-dwelling ray-finned fish found in off-shore temperate, tropical and subtropical waters worldwide. Also widely called dorado and dolphin, it is one of two members of the Coryphaenidae family, the other being the pompano dolphin fish. Mahi means very strong in Hawaiian.

Mahi-mahi or common dolphin (not related to the marine mammals known as dolphins), are highly sought for sport fishing due to their beauty and size.

Find some Mahi-Mahi recipes at Food.com.

Wahoo (Acanthocybium solandri) is a scombrid fish found worldwide in tropical and subtropical seas. It is best known to sports fishermen, as its speed and high-quality flesh make it a prize game fish. In Hawaii, the wahoo is known as ono.[4] Many Hispanic areas of the Caribbean and Central America refer to this fish as peto.

The flesh of the wahoo is white to grey, delicate to dense, and highly regarded by many gourmets. The taste has been said to be similar to mackerel. This has created some demand for the wahoo as a premium-priced commercial food fish. In many areas of its range, such as Hawaii, Bermuda and many parts of the Caribbean, local demand for wahoo is met by artisanal commercial fishermen, who take them primarily by trolling, as well as by recreational sports fishermen who sell their catch.

The strikingly beautiful blue marlin is the largest of the Atlantic marlins and one of the biggest fish in the world. Females, which are significantly larger than males, can reach 14 feet (4.3 meters) in length and weigh more than 1,985 pounds (900 kilograms). Average sizes tend to be in the range of 11 feet (3.4 meters) and 200 to 400 pounds (91 to 181 kilograms).

Native to the tropical and temperate waters of the Atlantic, Pacific, and Indian Oceans, blue marlins are among the most recognizable of all fish. They are cobalt-blue on top and silvery-white below, with a pronounced dorsal fin and a long, lethal, spear-shaped upper jaw.

The two main subspecies of sailfish, Atlantic and Indo-Pacific, range throughout the warm and temperate parts of the world’s oceans. They are blue to gray in color with white underbellies. They get their name from their spectacular dorsal fin that stretches nearly the length of their body and is much higher than their bodies are thick.

They are members of the billfish family, and as such, have an upper jaw that juts out well beyond their lower jaw and forms a distinctive spear. They are found near the ocean surface usually far from land feeding on schools of smaller fish like sardines and anchovies, which they often shepherd with their sails, making them easy prey. They also feast on squid and octopus.

A tuna is a saltwater fish that belongs to the tribe Thunnini, a sub-grouping of the mackerel family (Scombridae) – which together with the tunas, also includes the bonitos, mackerels, and Spanish mackerels. Thunnini comprises fifteen species across five genera,[1] the sizes of which vary greatly, ranging from the bullet tuna (max. length: 50 cm (1.6 ft), weight: 1.8 kg (4 lb)) up to the Atlantic bluefin tuna (max. length: 4.6 m (15 ft), weight: 684 kg (1,508 lb)). The bluefin averages 2 m (6.6 ft), and is believed to live for up to 50 years.

Tuna and mackerel sharks are the only species of fish that can maintain a body temperature higher than that of the surrounding water. An active and agile predator, the tuna has a sleek, streamlined body, and is among the fastest-swimming pelagic fish – the yellowfin tuna, for example, is capable of speeds of up to 75 km/h (47 mph). Found in warm seas, it is extensively fished commercially, and is popular as a game fish. As a result of over-fishing, stocks of some tuna species such as the southern bluefin tuna have been reduced dangerously close to the point of extinction.

Found across the globe in tropical seas, except the east Pacific, the great barracuda is typical of the approximately 20 species of barracuda. It may be distinguished from other barracuda by the black spots on its lower sides. It has a long, slender body, a pointed head and two rows of razor-sharp teeth.

Juvenile great barracuda usually live among sea grasses and mangroves where they are hidden from predators. In their second year, they typically move to coral reefs. Sometimes found in the open sea, they often remain near the surface, though they may be found as deep as 325 feet.